You wake up on a small island in the middle of nowhere. Use your time carfully, survive and find a way to escape this sandy prison.

cool game! I really liked it! I escaped in 16 days!

I wish that it was a bit harder to survive. Like, maybe make it so that it doesn't rain every two days so that you don't get suuper much water (cause I made 2 water collectors on day two, so day one was the only day where I got -water) , and instead add a sea water purifier to the crafting set (since, you know - you can make sea water drinkable by cooking it and collecting the drinkable steam) so that you can get more water later in the game but not right in the beginning.

Oh and add a pickaxe!

Foraging berries becomes useless after you've built the fishing rod, which makes the basket pretty useless unless it is suuper cheap to craft. (I crafted it after crafting the fishing rod so I just never used it. I had no need to forage for berries anymore and it only told me that I would get 1 food anyways, so dunno what was so "effiecient" about the basket).

When the clock turns 21, the character doesn't even finish the task they're doing, not even if they have alot of energy left - why can't you be up past your bedtime?

I feel like this game could use some threat. Something more to survive from and not just hunger and food. Sanity never went down for me at all (probably because I had an abundance of food and water). But it'd be cool with something more "exciting" going on. Maybe enemies? maybe natural catastrophies? maybe the ability to get inured while doing chores?

Different endings could also be cool: Like - wait to be rescued, start a life on the island, or the raft ending!

Would be nice to download. It crashed a few times and had to start over, and I'm not sure if its because of my browser, my internet connection, or the game itself having some bug.

Fun game! Really only comment is I feel the trash is a bit "Underpowered", I didn't once have a decrease in sanity in 19 days (Technically 38 because I had to start over), And since you can seemingly only get at-most one piece of plastic a day, It's much rarer than the Fiber, Which can be used for most of the same purposes, Really the primary use I found for it was getting water before you have 4 rain collectors.

Pretty good. The random reliance on rain and water in trash makes the game frustratingly longer than it should be, I ended up with dozens of spare food and just collecting trash then sleeping for many days repeatedly. Maybe once you craft a hut you could drill a well or something?

Didn't think of a well, that's a cool idea !

You implemented a similar system with the berries and fishing - they allow farming of food for the tradeoff of time and energy - so I was trying to think of a plausible way to make gathering water the same instead of relying on random chance :) Maybe a well could provide 1 water, and a bucket could increase the efficiency to 2 water, then allow the player to start hoarding water for the journey off the raft?

Great game! Escaped in 19 days. I will save water every chance I get if I'm ever stranded :)

Nice concept, but he bugs make it not playable for more than a few minutes before it locks up. :-( Also, it's difficult to play with lower resolution screens (I only have 1024x768).

Sorry to hear that, can you explain in more details the bug(s) you encoutered ?

It locks up. I do not know more than that. Often, it happens right after clicking an action. Sometimes it will do the action before locking up, sometimes it will even update things like inventory before locking up, and other times it won't do anything apparent at all--it just stops responding to anything. I may try to play some more and see if there is any pattern to it (I did finally complete a game and escape the island). I also encountered the bug reported by UnitVector in he comments.

Gave it another try. The only thing I am seeing right now are a lot of CORS cross-site scripting errors in the console log with api.gameanalyics.com.

One pattern that seems consistent: Trying to craft consecutively locks up. Doing some other action in between crafting seems to avoid locking up.

That seems to be he pattern. Doing (almost?) anything twice in a row causes a lockup. I just locked up by chopping wood twice in a row.. Which would have given me enough wood to create the raft and escape after only 17 days. :-(

Great game, awesome job.
I love the random elements added by the trash, and the fact that ropes or water collectors can be made in different ways.
The music is nice, the visuals are great.
Systems are complex and could be explained a bit better (better crafting menu, simpler mouse interactions, etc) but it's already very very good for a jam game.
Good job!

I was really enjoying this, but after a few days, things started not working correctly. It started when I tried to make a "Vegetal rope". When I tried to make it, he wouldn't move to start doing it. I clicked to make it a few times then gave up and tried something else. After doing that task, he suddenly went and made the rope, which didn't use any fibers, but instead left me with -5 plastic and 3 ropes. Then even though it said I had 3 ropes, it would not let me craft things that required rope. I had to just quit.

I was able to finish it on the second game, but if I tried to gather wood twice in a row, the same thing happened. I had to do something else, then the wood gathering would happen automatically after.

Aside from this one glitch, this game is great fun. I like the style, and the progression of tools/houses. The music is very good, too. 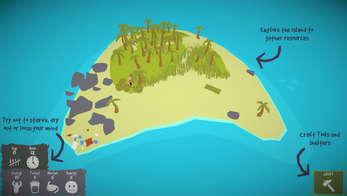